Political Yard Sign Rules – Where Can I Put Political Signs? 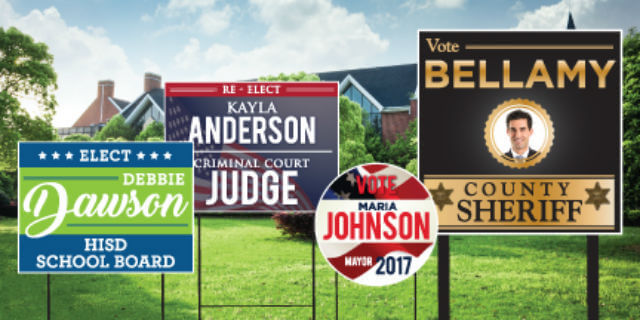 The rules of political yard signs vary from state to state. In Texas, campaign signs cannot go up prior to 90 days before the election, and all signs must be down within 10 days after the election.

Just because you must wait until 90 days before an election doesn’t mean you can’t have your campaign signs ready to go. With our knowledge of corrugated plastic yard letters and custom signage in Houston, the Houston Sign team can help create your signage before it’s time to distribute.

Campaign teams are frequently asking – where can I put political signs? Learn all about the essential political yard signs rules so you’ll be prepared when the time is right.

Placing campaign signs on public property is illegal. The Texas DOT further explains that it is illegal to place a political sign anywhere in the right-of-way or on any objects within the right of way, such as telephone poles, trees or traffic signs.

Any sign on private property that can be seen from the roadway must include specific wording, so make sure you’re compliant.

Houston Sign can help you create your custom election signs. 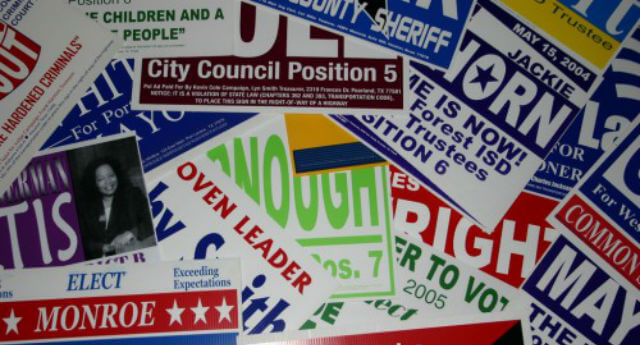 Is It Illegal to Take Down Campaign Signs?

Rest assured that if you’ve placed a campaign sign within the right of way or if it’s posing a traffic hazard, Texas DOT will kindly remove it for you without notice and may even charge the campaign for the removal.

Many of the laws pertaining to political signs vary from state to state or city/county to the next. One thing is clear, though. Removing signs on your own is illegal as it is viewed as hampering someone else’s first amendment rights. If you do find a campaign sign in an illegal spot, don’t remove it yourself as removing campaign signs is illegal. Instead, notify your local police of the infraction and let them handle it.